SEEING IT THROUGH, SOME WORDS FOR THE KAMEHAMEHA PUBLISHING EVENT FOR LURLINE MCGREGOR’S NEW NOVEL, BETWEEN THE DEEP BLUE SEA AND ME 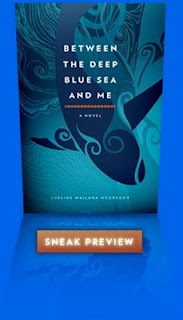 Between the Deep Blue Sea and Me came about because of the community story of the mishandling of sacred objects. In Hawaii we all read or heard about the story, or knew someone who knew someone who was related to so and so…. In Indian country we call it the “Moccasin Telegraph”. Here it’s called the “Coconut Wireless.” The story also made its way into larger indigenous circles and circulated through the world press. That how it became part of us. And how it was handled effected and continues to affect each of us here. Who do the “objects” belong to? Who has authority? Do they belong in a museum? Or must they be turned to a cave that may or may not have been the place in which they originally lived? And who is the final authority? There’s more to this complex story that we may never know or understand.

This conflict became the spark for the exploration of the story. That the Maori writer Witi Ihimaera’s Whale Rider story was brought successfully to the screen was also a major catalyst for Lurline. She began to consider the creation of a Hawaiian story with the power to heal. She asked me to collaborate in writing the screenplay and we set off on our journey with prayers, and the help of many around us both seen and unseen. Though this is a particularly Hawaiian story, the issues, characters, and sensibilities are similar to indigenous people all over the world. Lurline then took the screenplay and made the beautiful novel, Between the Deep Blue Sea and Me.

Most of what we do in this life, as individuals and organizations are not of us, but through us. Each of us, community and being, is a small part of a web of ancestral thoughts, beings, and knowing. This living being is always shifting according to our acts, thoughts and dreams. It is us. Western educations and religions have taught us that we are omnipotent rulers, given dominion over the earth and waters. Our indigenous educations, (and ultimately we are all indigenous for we can each trace our lineages back to a time and place when we remembered the original teachings in which we are related), remind us that everything is alive and of consequence. This conflict of understanding is at the root of Lurline’s novel Between the Deep Blue Sea and Me. It’s what drove Whale Rider, and perhaps is driving the fate of human beings in these times of cumulative destruction of our natural world. We, of this time and place, must make beautiful and diligent sense of all of it, for surely colonization has taken us away from ourselves so we could learn to see and know ourselves with absolute clarity.

Stories are alive and have the power to create bright openings into a larger, sacred sense, or destroy by wiping out peoples, languages and other ways of knowing. As the only indigenous person to ever win a Pulitzer Prize, Scott Momaday, of the Kiowa People of Oklahoma has spoken of the power of words, how they are alive, to speak is to call into being, to interact with power in the world. He says: “Words were medicine; they were magic and invisible. They came from nothing into sound and meaning. They were beyond price; they could neither be bought nor sold….”

Now the story called Between the Deep Blue Sea and Me is making its way into the world, and like any human creation it bears strengths and weaknesses. The story has come together through the efforts of many (many in this room). Mahalo Lurline for bearing this story into this time and place. May it continue its journey with aloha, or as my people say: vnvketckv. May we continue together beautifully in this world.


And paddle out from the weeping
Let the failing fail
Let the stars bear trouble
Let the canoe carry
What we cannot bury.

Thank you for your beautiful words, healing words. Perhaps they will extend not only between people of indigenous cultures but between all people. You wrote,"ultimately we are all indigenous." This I believe. Jung also spoke to this in his concept of collective unconscious. Perhaps all words, the thoughts and feelings within them, become part of the dimensions of the universe which we only now begin to perceive.
nancy bo flood